"We're lying to our children when we tell them they're proficient, but they're not achieving at a level that will prepare them for success once they graduate."

No Child Left Behind required states to create tests that will hold them accountable for raising test scores.  This was a decade ago.


The Atlanta Journal Constitution (AJC) broke the story of wide spread cheating among schools in Atlanta. The cheating artificially raised the test scores of many schools throughout that city.  Bonuses and accolades were wrongly given to educators at all levels that did not earn them.  Parents and students were given a false sense of achievement based on a lie.  So now AJC is using the same methodology to question the test scores of other cities across the nation.  Their analysis doesn't actually prove cheating, but it reveals patterns that, in Atlanta, indicated cheating in multiple schools.


Cheating is wrong.  Unfortunately, cheating done by erasing and correcting wrong answers or giving hints to test struggling students is actually superficial compared to how our students are and have been cheated out of a quality education.


States, like Mississippi,  set their test scores to a lower standard to create the impression that their students were achieving at a level that will prepare them for success in the next grade.  School districts have redrawn boundaries to change the testing population of schools to artificially raise test scores.  Magnet and charter schools have released their poorest performing students back to the neighborhood schools to artificially raise their test scores.


All of this is bad.  It's cheating.  Worse, many of these actions and more are sanctioned as OK to implement as sound strategies to improve schools.


Worse still is the narrowing of the curriculum.  We have become a nation with a test prep education system that willingly sacrifice social studies, science, vocational classes, and the arts to concentrate solely on what is going to be on the federally controlled state test. Teachers are being force to not only teach to the test but to eliminate everything else that will not be on the test. U.S. Education Secretary Arne Duncan and President Obama have both spoken against this unintended consequence of No Child Left Behind, but promote tying the same policy to teacher performance evaluations with Race To The Top grants. And republican politicians eagerly provide bipartisan support to this already proven bad policy.


It is a bad idea to tie teacher performance evaluations, bonuses, and federal monies to this failed policy called accountability.  It does not account for or reliably measure a quality education.


There is a better way.  Spelling bees. Science fairs. Projects.  In the 21st century, students should be required to demonstrate with projects that they have mastered the state standards.  Badges can be earned to demonstrate achievement and proficiency.  Give students this kind of challenge and they won't guess that the answer is A, B C, or D.


Please join me in my reflections on 21st century learning.  I want to read your comments and opinions.  I will do my best to answer questions.

Email ThisBlogThis!Share to TwitterShare to FacebookShare to Pinterest
Labels: Cheating, NCLB, No Child Left Behind, Race to the Top, RTTT

Looking Up and Beyond 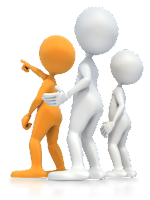 
It's been awhile.  Truth is - I needed a break from writing and attending school.  I have been reminded that life is not only unfair, but also short.  My mom passed away last summer after many years of poor health.  We celebrated her 75th birthday that weekend and on her actual birthday passed away.  Now my dad will be undergoing surgery to remove a tumor in his colon.  A weak heart further complicates the surgery.


My dad is still the funniest person I know, rivaled only by my youngest daughter.  She's the one that would be a vegetarian if it weren't for bacon.  She's the one that wonders why she is not allowed to watch certain shows when she hears the same language on the school bus - and what does those words mean anyway?  Well, he is sort of like that.  He is not concerned about ever living in the house he just bought in Florida.  He is more curious to see if the Mayan calendar actually predicts the end of the world in 2012.  (I've learn to just accept and not try to understand).


I believe in prayer.  If you believe in prayer, please include my dad in one of them.  He would be disappointed to miss the opportunity to see if the world will end in 2012.  What can I say - he's my dad.


In the meanwhile, I will return to being outspoken, writing, and advocating for what I believe is right.  That is the kind of person my parents raised me to be.